Today AT&T installed AT&T 1000 fiber.  It works, sort of.  Out AT&T 75 router was not replaced with a new fiber router.  Instead, an interface box was used.  I've done some speed tests using the official AT&T speed test.  Believe me, this new 3.8$K Acer supercomputer is NOTY slow. 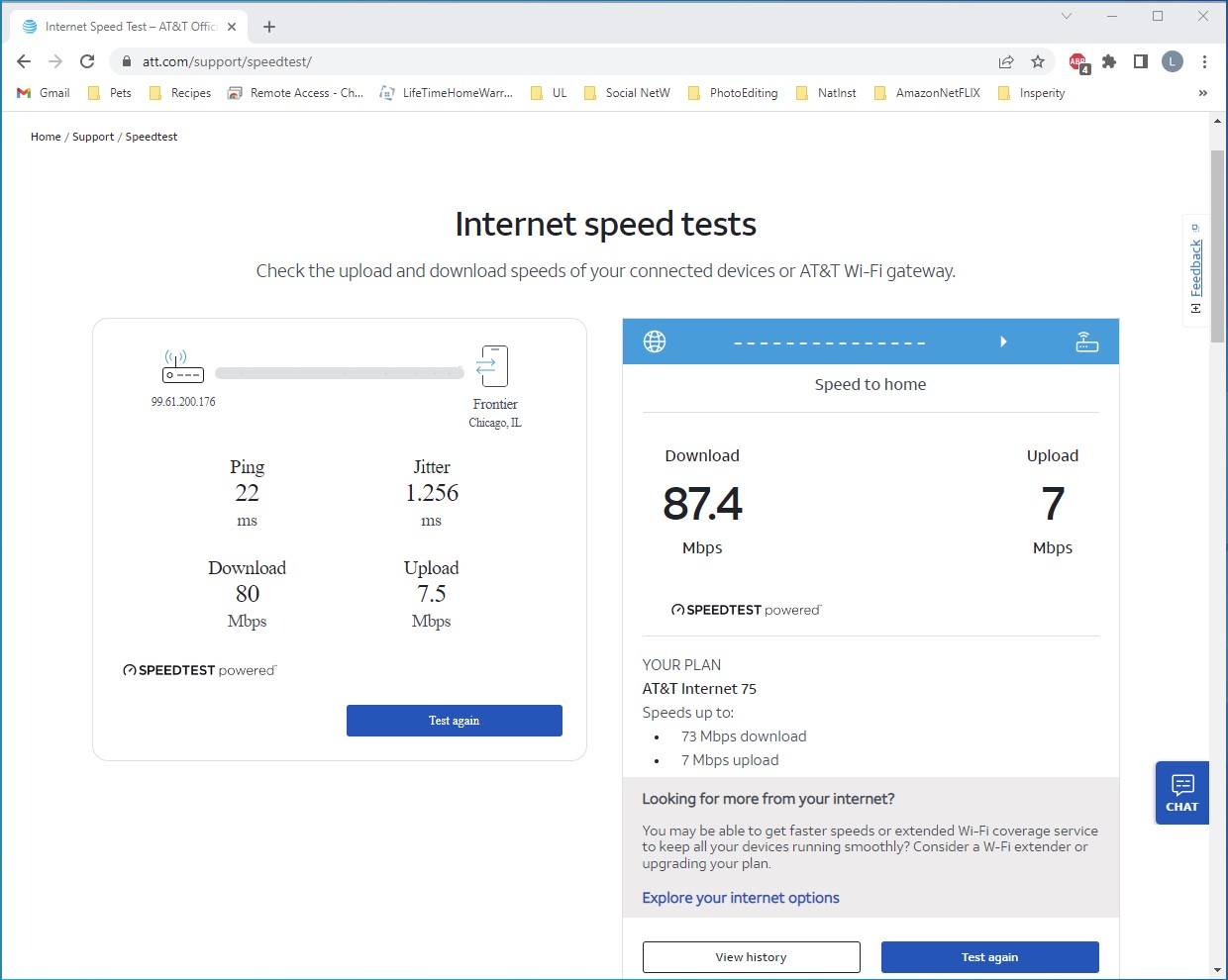 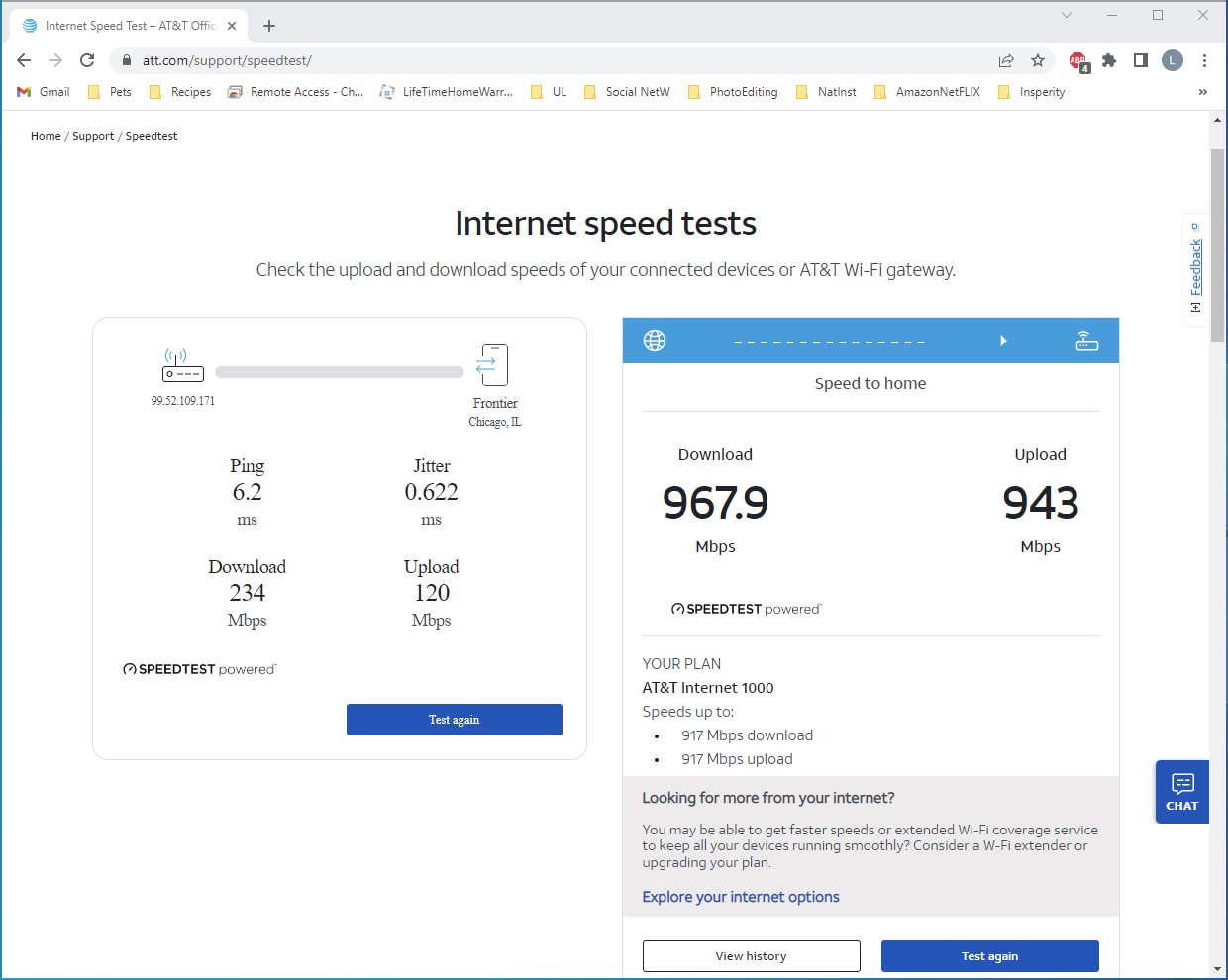 24% of rated speed to home download and 13% of speed to home upload.  That old router does NOT HAVE HIGH SPEED WiFi capability.  However, it does have high speed WIRED capability.
Wired AT&T 1000 speed test. 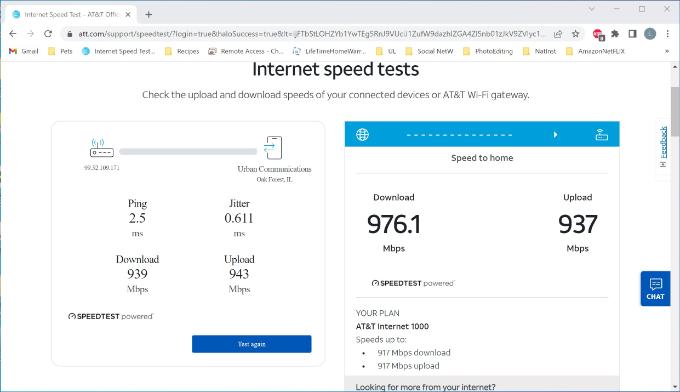 See?  We are getting service at rated speed BUT THE OLD ROUTER CANNOT HANDLE IT WiFi.
Our installation technician, after I showed him this admitted that the new high WiFi speed routers are on back order.  What I would like AT&T to do is set us up with a router that can handle the high WiFi speeds.  Really, less than 23% of speed WiFi?
A concerned AT&T customer.

It looks like maybe the wifi on the Acer is connected to the 2.4GHz band.  That's not uncommon with bandsteering enabled, which is the default mode for all AT&T gateway,

What make/model wifi chip is in the Acer?

What does Windows show is the connect rate for the wifi?

What is the model # of the AT&T gateway?

Correction, my PC is an Asus super gaming laptop. 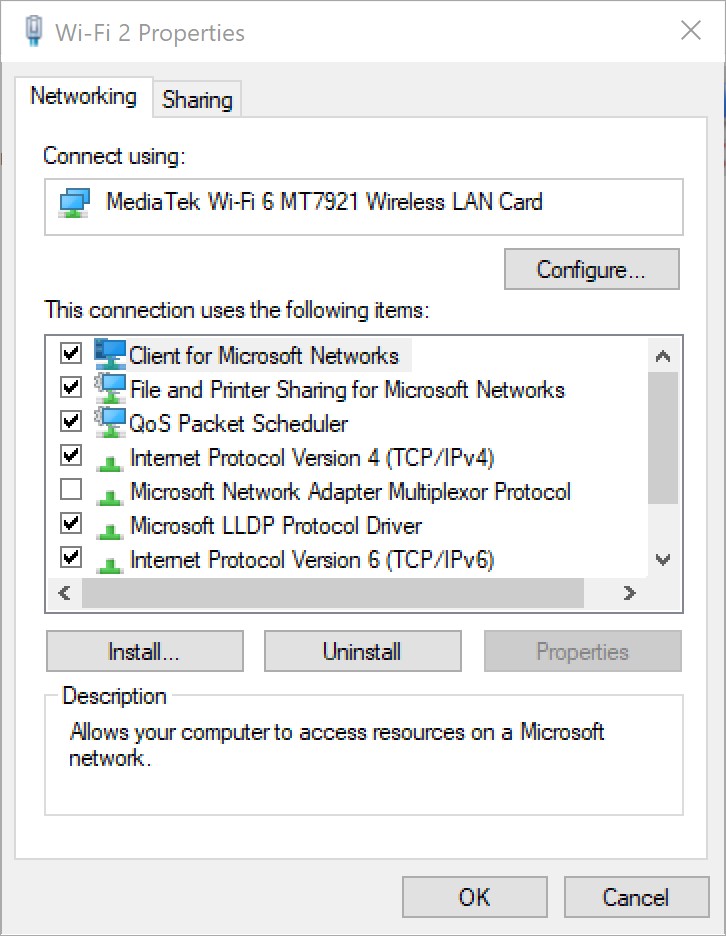 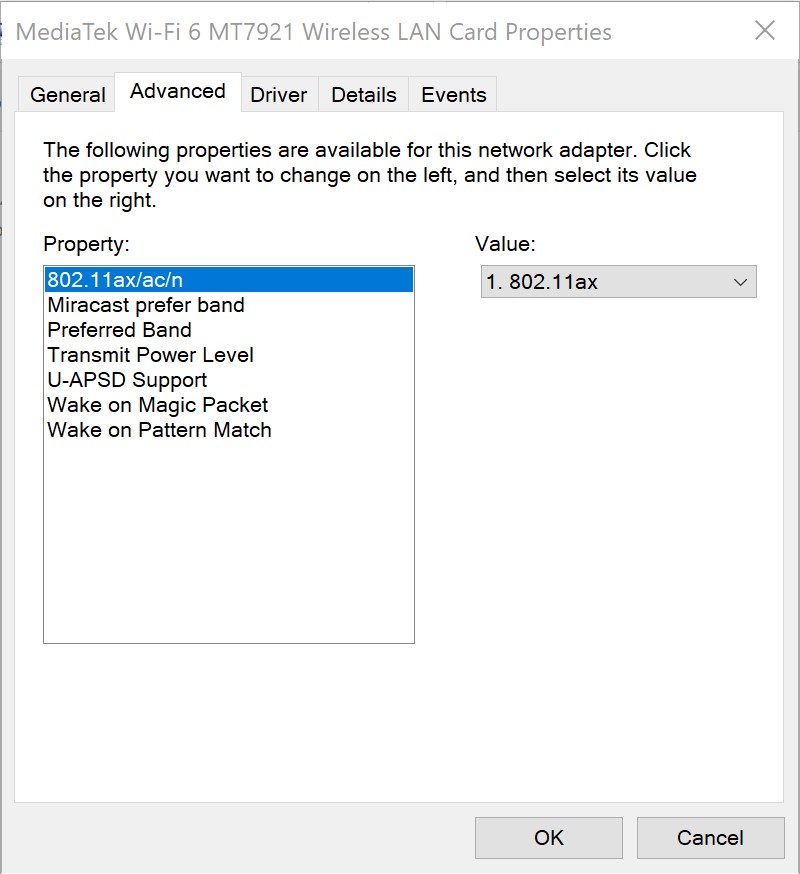 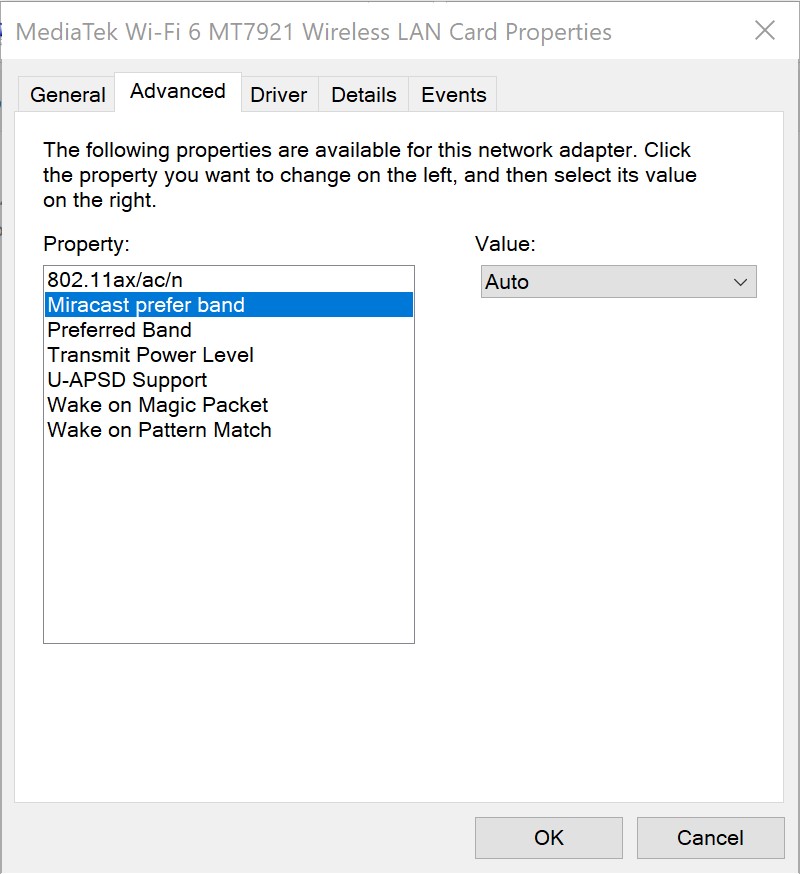 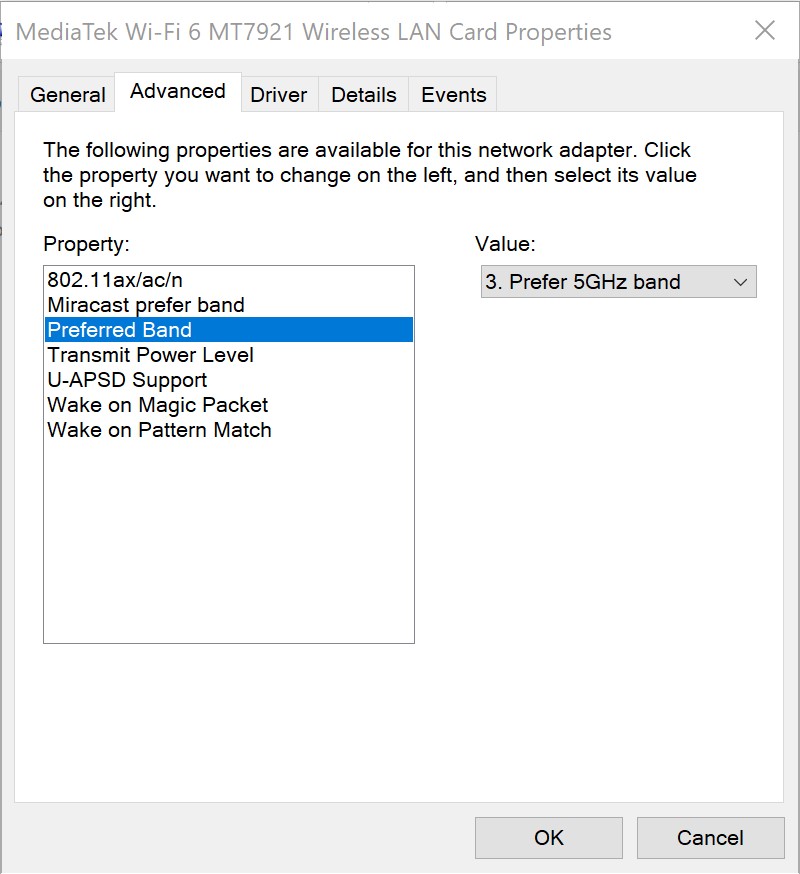 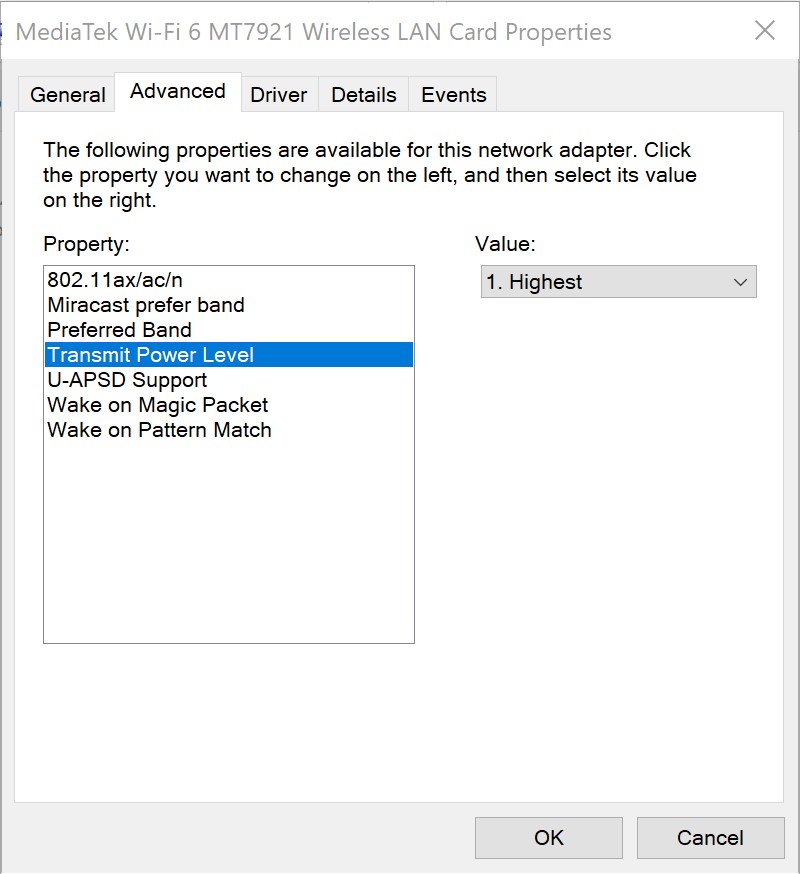 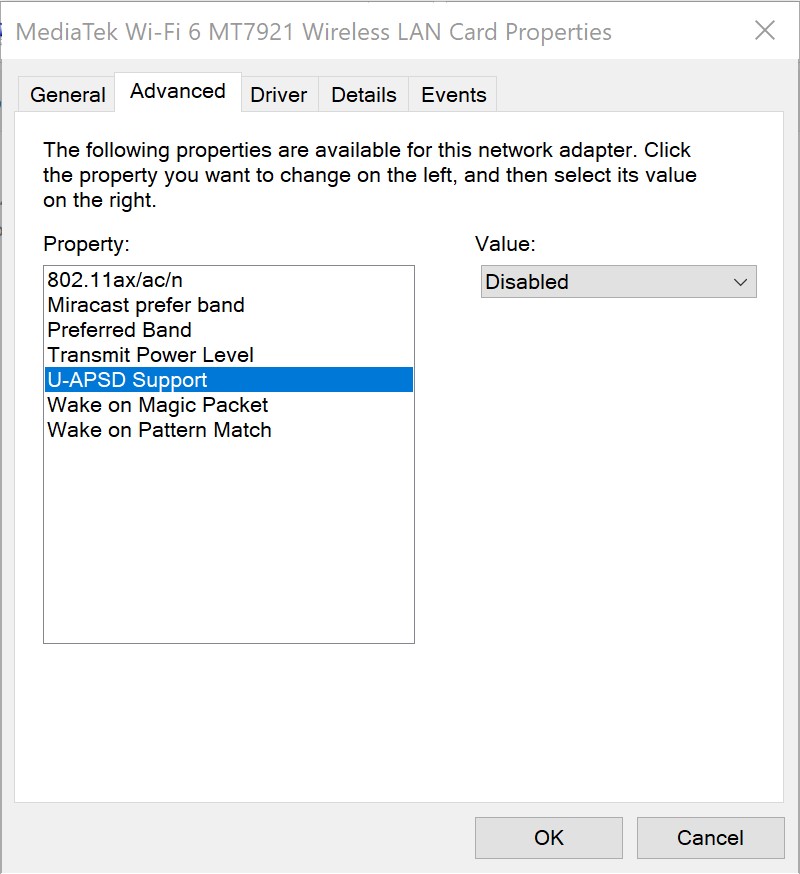 Sorry, I should have given you a command line to get some of the info.

Open a command prompt and run this command and copy back the results:

There is 1 interface on the system: 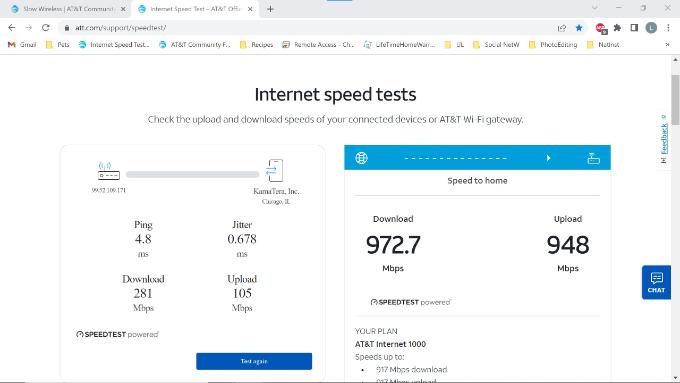 I've run a wire to my office but feel I should get more than 33% of capable WiFi speed.  Again, using 3 year OLD router from AT&T 75 plan.

Ok, good, that confirms you are using the 5GHz band so that's not the issue.

Just for grins, turn Bluetooth OFF and test again.

Oh, while the BGW210 is 3 yrs old, that's not old by AT&T standards.  It's still the default gateway for most as the BGW320 has been in short supply and only used on new accounts.  In some areas, the BGW210 is used in new accounts that aren't subscribed to >1Gbps service.

tonydi:  I never have Bluetooth on unless I'm using it for something.  So, all speed tests with Bluetooth OFF.  This seems to indicate that the BGW210 cannot handle high WiFi speeds.

While 234 / 120 is a bit lower than I would expect, I think your expectations of 802.11ac may be higher than they should be.  The BGW210 is, I believe, a 4x4 device, so the highest theoretical speed is 1750 Mbps.  [Theory is a nice place, I'd like to visit it someday because everything seems to work there. ]  You can't even achieve that in controlled lab conditions.  To add to that, your device appears to be 2x2, meaning cut that speed about in half, or 867 Mbps, still theoretical, not real world.  Real world, probably half it again.  433 Mbps.  That's still twice what you're seeing.

The BGW210 has internal antennas, and it doesn't really have the greatest Wi-Fi.  The BGW320 has 802.11ax, but AT&T has a limited supply of those, and they have to be used for Fiber connections of 2 or 5 Gbps.  So, if you want one of those, upgrade to 2 Gbps.

AT&T never said that the BGW210 would give you full gigabit Wi-Fi speeds.  If you want to get better than what the BGW210 can give, I'd suggest you find some device marketed by a company that lives or dies on how good a Wi-Fi connection its device provides and connect that to your BGW210.

I mentioned the Bluetooth thing because that was the magic bullet for a number of MediaTek MT7921 users.  That idea came from some different online threads where people were complaining about the same speed problem as you are.  The general consensus is that the card has issues at these higher speeds and those that swapped out the card for an Intel AX201 or AX210 immediately saw full speeds.  These cards are <$30 and take a few minutes to swap out so if this were my laptop that's what I'd be doing.

The BGW210 is perfectly capable of delivering the max speed in a laptop-based card.

Here's my AX201.  This is about all there is for a 5GHz connection. 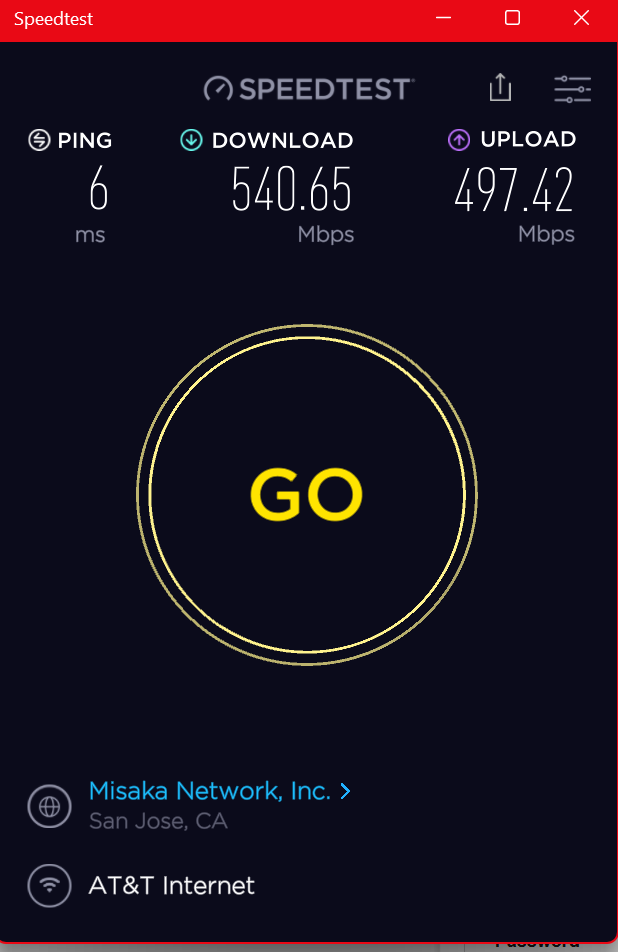 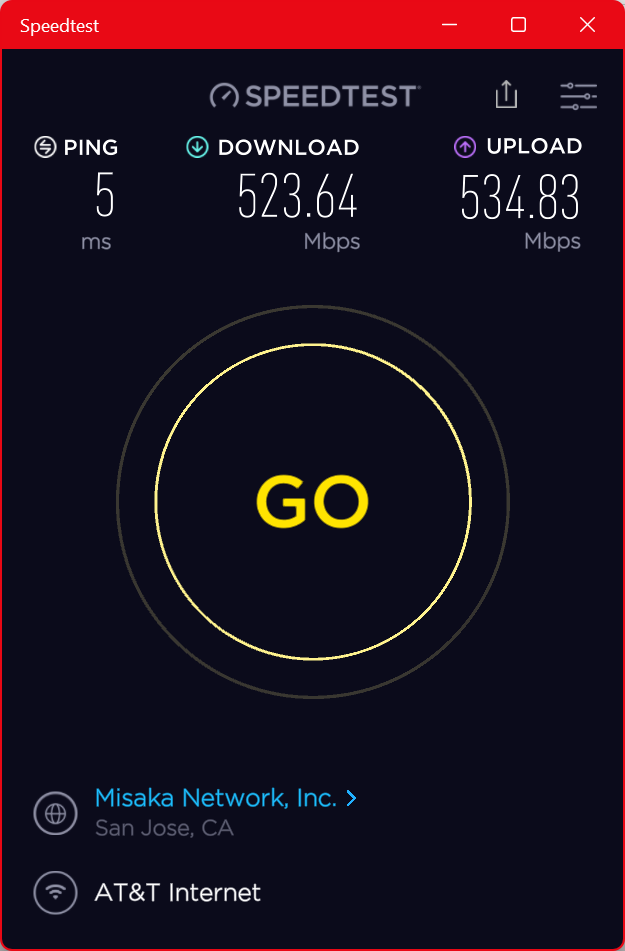 And just for grins, here's the same card connected to a Wifi6 router using IP Passthrough from the BGW210.... 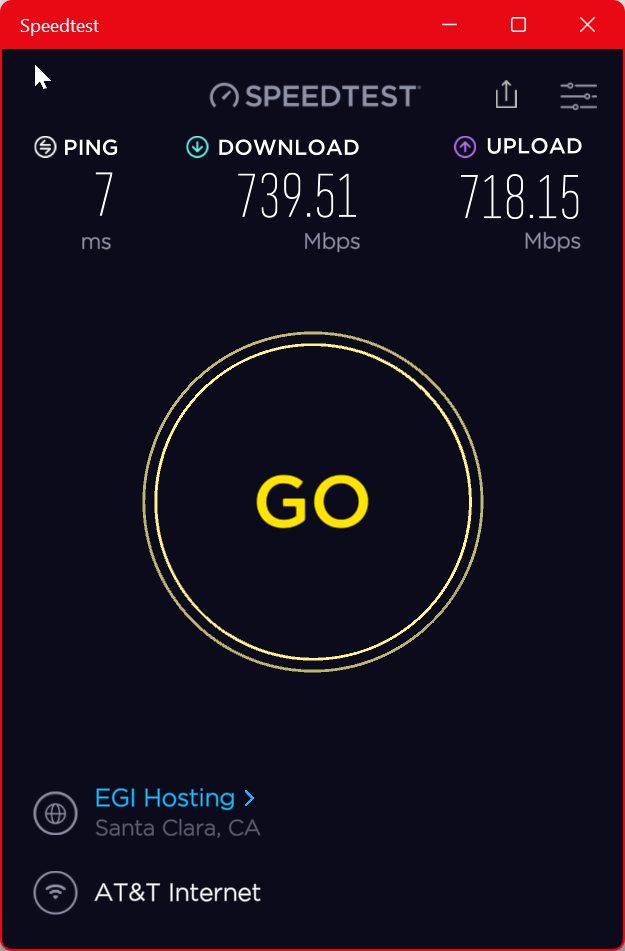 tonydi:  I see.  AT&T routers cannot do 1 Gb wireless.  Can come close.  We have about 13 WiFi devices here.  Perhaps we should look to Google or Verizon...

Have been a loyal AT&T customer for over a decade.  But if no 1 Gb speed with wireless perhaps time to change.  Want to get what I pay for.