i need a way to get in contact with higher ranking AT&T management to fix my account and to stop the thievery.

I feel honestly as if i have worked harder to keep atts service rather than be appreciated and retained by att. It feels almost as if att just doesnt want my business and i couldn't begin to think why.


As i stated the the information provided from your records is what i used to get my calculations but to reiterate even those are wrong. I am being over charged on a monthly basis in a regular situation. This is far from regular. Let me try to explain.


Your billing has been incorrect but from lack of energy to try to have it fixed i have just continued to pay it knowing it was incorrect because as you can see getting anything done in the customers favor is gnarly impossible. My bill should be $324 a month and yes usually it carries a $7 late fee every month so $331 a month. Simply dividing what i have paid over the course of 12 month not including any credits i have been paying $460 a month over the previous years. Over the course of the last 6 months however it has been almost a $1000 a month. Once more i have even paid these outrages numbers and still cant seem to keep from being disconnected. 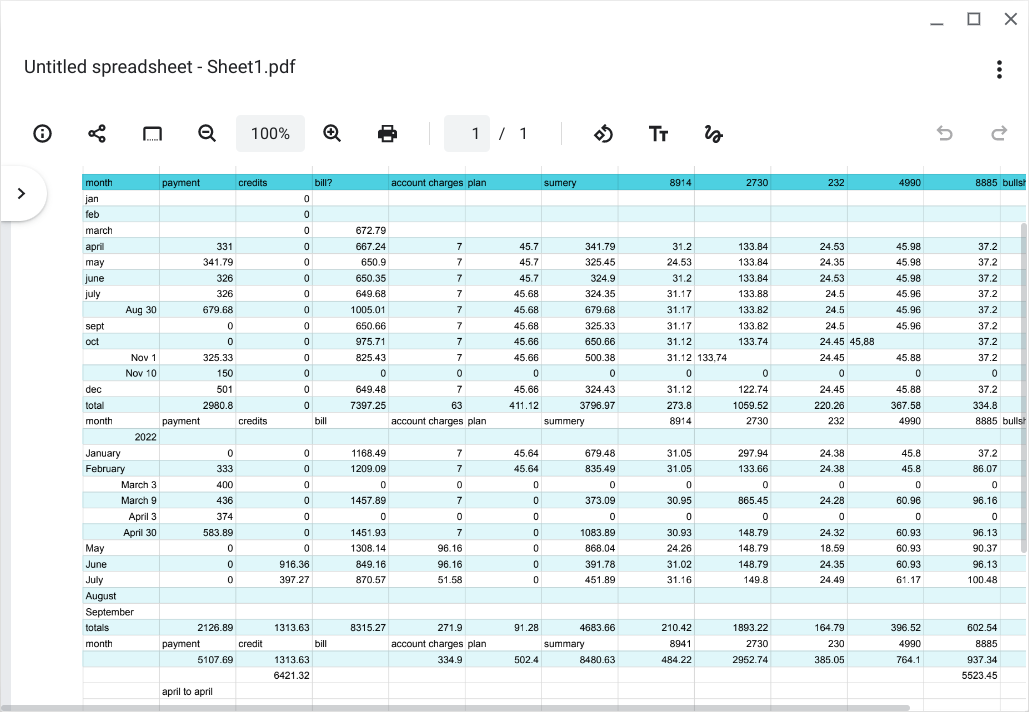 As mentioned you should file a Better Business Bureau complaint. That complaint is forwarded back to AT&T upper management and someone will call you.

Clearly there is something wrong.

But you are still in a disadvantage because you do not know what plan you are paying for or how it is structured.   I feel like AT&T is taking advantage of this lack of understanding.

One of the major problems is AT&T is charging for devices that might have been receiving bill credits, but they aren't because AT&T has you perpetually late in their system which voids the credits

It does not make sense to continue to pay for service for a phone line that you are not using just because you want to save the number.

If the line was upgraded because another line was not eligible, that might be why you are still paying for installments on two lines but the phone is being used on a different line as a replacement for a broken phone.   Only you can answer why the wrong line was upgraded.

Canceling that phone number when there are installments attached would accelerate the installments and the balance would be due on the next bill. I don't know if that phone is supposed to be getting credits but since you're always past due according to AT&T they're not giving you any credits anyway.

The number could be ported to Google Voice for 20 bucks (which cancels it off At&t and accelerates installments). It will remain attached to your Gmail address you can continue to use it as a virtual number on your phone, and if you wish to make it a physical phone line again you can Port it back to a regular service provider. Google Voice is free to use, it uses your data plan.

I would wait until after the Better Business Bureau complaint is resolved to make a decision on this line. By some miracle AT&T might credit the full remaining installments on this phone which would allow you to cancel the line without having to pay for the balance on the phone.

Last... how is Verizon in your area? Verizon also gives a 25% discount for military off current plans. If you have iPhones and apple watches, you could pay them off unlock them and they will work on Verizon perfectly. Verizon has a substantial offer for credits if you bring your own device.

It's this kind of crapola that made me switch to Verizon 3 years ago.

let me know if i messed this up

I don't think you messed up but the pictures are coming out very blurry on my end. I'm going to switch to a tablet because I'm on mobile

I also posted a link to the same pictures on goodly drive. I haven’t checked the link myself yet but i will. If they are no better I might just have to post a screenshot as I did the spread sheet.

yes Verizon is probably going to be my only option. I only owe like a 100 dollars On each phone.  I honestly should have done it years ago myself, just thought maybe I had tenor or something with ATT.

i did not know that about being able to save that number that way I will look into that. I agree it is pointless but is just one of those things that I can’t bring myself to do.

I failed to answer your question about the spread sheet. The Column with all of the “7” and the “77” s in it are late fees and 2 restoration fees with a late fee = the 77. The “plan” column is what they where charging be for the plan it’s self the 45 dollars is the 100 dollars for the plan then a line discount and a military discount then plus fees brought it to $45.xx I’m assuming. Then they charged me on each line as well. $51.60

a a line I think is what it shows.