Have I been scammed by an AT&T rep?

About six months ago, I changed my AT&T plan to one a bit more affordable. We had been paying about $90/month (I had a teacher's discount) before taxes and fees. New plan was $75 with unlimited data. A good deal.

Before formalizing the switch, I saw a summary indicating that this plan was significantly more expensive than I thought. I asked the rep about this. She told me not to worry:

"Upon carefully checking, what you have received is what we call Customer Service Summary. This is being sent every time

that a customer make changes on the account. Customer Service Summary are pure charges of your plan and features and does not include any discount that's why the amount you saw is higher than the usual. But when the actual bill is generated, you should see the amount you expect."

Okay, cool. So I went ahead. But when the actual bill came, it was indeed higher than I expected. Then life intruded. My parents got Covid. Next couple months were a blur. I continued to paying the wireless bills, without having time to address the issue. Finally today I reached out to a AT&T rep to see what could be done. With the apparent language differences, it seemed impossible to rehash the previous issue. So when he offered me a cheaper plan, I took it. And he sent me an "AT&T" quote that seemed consistent with his offer.

Then he offered me "as a loyal customer" an iPhone 13 for $5/month. Now it so happens that I've been looking for an  iPhone. I have an old one — all paid for — and was leaning toward an iPhone 14, but this was obviously an excellent price. So I went for it. The $5/month figure (for 36 months) was referenced several times. I appreciated the rep's help.

After giving my credit card info (taxes) and address, I was sent a series of emails confirming everything. I noticed that there was one document that I could carefully review and accept terms BEFORE the order would be shipped. So I ended my conversation and went to look at the document carefully.

It indicated that I just bought a $729 phone.

I've tried calling AT&T, but it's Saturday night, and the automated voice informed me I had to call back during the work week.

Now I suppose it's possible that the promotional deal (or whatever it is) will kick in later. After all, the AT&T rep assured me that I would only be paying $5/month for it.

Only my experience this summer had a similar vibe. Super helpful rep offering me something that conflicts with official paperwork. I made me wonder if reps might be intentionally offering fraudulent deals, keeping the commission from transactions in which a percentage of customers do not notice or complain about the discrepancy?

I hope that's not the case. But right now....it seems like it.

Hello twain, we're here to help you with your installment plan.

Let's meet in a Direct Message to review your installment plan and calling plan. Please check your Direct Message inbox (it's the chat icon next to the bell icon in the upper right corner of the forums).

Looking forward to speaking with you soon.

The deal on the iPhone 13 does not require a trade in to get the $5 price. You will be charged and installment every month that is equal to the full price of the phone. You will also receive a credit, which may not start the first month, for the difference between the full installment price and $5.

The information the customer service rep gave about the CSS is absolutely correct. Those things are useless.

What plan does your bill say you're on (so any changes made yesterday are excluded)? With the 25% discount, all three unlimited plans should be less than $75 before taxes and fees. Was the teacher discount removed?

I don't know why they send it out.

Yeah, the iPhone deal was legit. I misunderstood the nature of the deal — stay with the company for three years, and they'll give a decent discount on the phone. Sometimes it's tough to get clear info from online reps.

But I wasn't wrong with my assessment of the previous plan offer in the summer. I was told one thing and given another. I just looked at the transcript again and not only did the rep write several times about giving me something cheaper than what I had been paying (it turned out to be more expensive), they did indeed mention that teacher discount. Turns out that the plan I was actually given excluded this kind of discount.

That experience soured me a bit with AT&T (I've had no complaints at all otherwise). I ended up turning down the phone offer, because I feel a bit reluctant at the moment to basically have a multi-year contract with a company I didn't know if I could trust.

But it's no great deal. I was paying $50/line before fees and taxes. And now I'm assured that the new plan will include the discount and be about $45/line. Which, you know, is an improvement.

(though still a good deal more than the offers I've been getting from T Mobile).

Thanks for the feedback and help.

When I said "It's no great deal," I simply meant that it was no "big deal," that is, not a huge issue.

stay with the company for three years, and they'll give a decent discount on the phone. Sometimes it's tough to get clear info from online reps.

In your original post you said, "The $5/month figure (for 36 months) was referenced several times." It sounds like you did get the clear information that you'd have to pay $5 a month for 3 years to get the deal.

Turns out that the plan I was actually given excluded this kind of discount.

Not possible. You had to be on an unlimited plan to get the deal on the iPhone 13. And the current unlimited plans are eligible for 25% teachers discount. You do have to be the account owner, and the teacher to get the 25% discount. I don't know who you're talking to who's telling you different.

Please go to att.com and look at the wireless prices. You will see the three tier "unlimited your way" plan.   It is one plan with three different tiers, Premium, extra, and starter.   You can mix, or get the same tier, and change any time.    I agree it sounds like you were both put on the Premium plan rather than extra or starter. Unless you need a lot of Hotspot data, neither extra or premium is what you want. 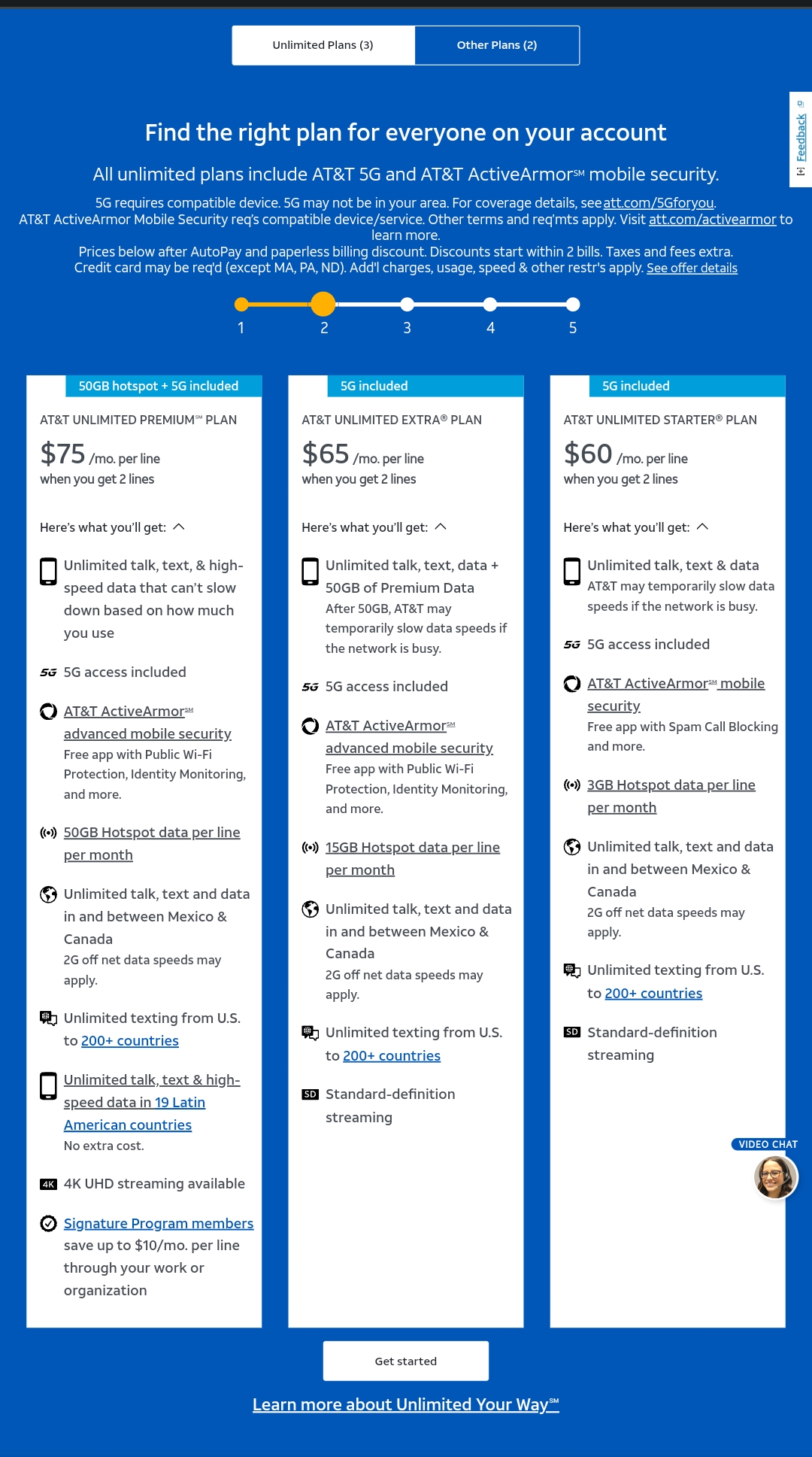 Thanks so much for this clear delineation of plans. I recently discovered that the plan given to me in June was VALUE PLUS.

That plan offers a $50 rate, including autopay/paperless. But that plan does NOT allow for any teaching discount.

Turns out, that was absolutely the wrong plan for me. I've always had some kind of educational discount during the last 12 years. And I could have had the AT&T Unlimited Extra plan for the same price ($50/line) after the teaching account. Indeed with the teaching discount, I could have Unlimited Starter plan for $45/line......which is probably what I've now been offered.

So in retrospect, I think the rep last mistakenly mistakenly thought they could get me that Value Plus plan AND the teacher's discount. That would be consistent with the numbers they gave me. They were just, you know, wrong. Although I'm happier to imagine that they meant to give me a much cheaper rate, rather than I was intentionally misled.

I wouldn't mind getting compensated for the modest difference — does AT&T ever do that? — because I simply and faithfully followed the advice of the rep. But I'm glad to have the mystery cleared up anyway.