I have a OnePlus 5T that I was using with StraightTalk but they kicked me off their network due to my phone not having official VoLTE support. So I decided to try my luck directly with AT&T:

I purchased the $300 12-month 8GB prepaid plan several weeks ago. The order was placed successfully and I received some confirmation emails. Several hours later I received an email asking for me to call 866.895.1097 because there was an issue with porting my number from StraightTalk. The guy on the phone was really helpful and he got a StraightTalk representative on the line and while in a three-way call I provided the security codes to the StraightTalk rep to approve the transfer. I was then told to just wait for the SIM card to arrive in a couple days and everything would work.

Several days later, the SIM card arrived and I installed it into my OnePlus 5T and turned the phone back on. I had the LTE icon in the top-right corner but it had an exclamation point on it and I couldn't place calls or access the internet. Then, I received a text message from AT&T to activate my service with a web link. It opened in the browser and auto-filled my SIM and IMEI number and then I filled out the rest (zip code and passcode) but when I click Continue, I received an error saying that my SIM was already activated!

I don't know how the SIM card could have already been activated because I don't believe I had submitted the IMEI of my phone at that point. What would it be activated against?

After getting fed up with the automated call systems that AT&T has in place, I decided to go try my luck at a physical AT&T store. I ended up going to two stores in my area and both of them said that they can't assist with any prepaid-related issues and I was sent away...

I also tried logging into the online prepaid portal: https://www.paygonline.com/websc/forgotPasscode.html

and request an online password as a new user. But I receive this error message:

So, clearly, my wireless number is not "in the system" as the automated phone systems say. But why not?
How could my SIM card be activated but I don't have a wireless number in the system?
I'm worried about losing my phone number. It seems that it's in limbo somewhere because I can login to my StraightTalk account and the number is no longer active in their system. I tried checking the number porting status here: https://www.att.com/portstatus/
And it seems that the transfer is pending and waiting for my service to be activated: 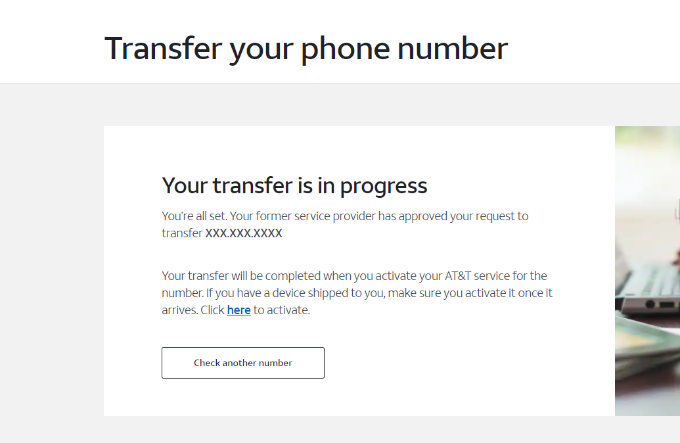 BUT I THOUGHT MY SIM WAS ACTIVATED ALREADY!?
I also realized that the OnePlus 5T isn't on the officially supported list of phones even though it supports VoLTE when enabled in the settings. So, I ordered a OnePlus 7 Pro GM1917 which IS on the official list and it just arrived today and I put the SIM card in it and I still don't have service and I'm receiving all the same errors and issues that I was with the OnePlus 5T...
I don't know what to do next. I'm planning on making a few more phone call attempts to the support numbers but these online community forums are effectively my last option.
Help!

You need to replace the phone.   Somehow that should have been clear with Straight Talk that the phone would not work on AT&T anymore no matter which service provider you were buying AT&T service from (because you were buying At&t service through Straight talk)

Since prepaid does not refund, and you don't want to throw 300 bucks out the window. You'll have to replace the phone with one that is voice over LTE capable. If you like OnePlus devices, check out the 8T.  I got a great buy on one not long ago.

@formerlyknownas Maybe you missed the part where I said I ordered a OnePlus 7 Pro GM1917 already that is on AT&T's official supported list and the phone service still does not work.

Also, I've read success stories about getting OnePlus 5T working on AT&T's network as long as VoLTE is enabled (which it is on my 5T). But that doesn't matter anymore since I switched to the OnePlus 7 Pro.

I did miss that you had installed your sim card in the 7 Pro. Please check the SIM card information here.

Anything you've heard about getting the 5T working on AT&T is a false lead.

What people are doing is using menu functions to force incompatible phones to roam on  T-Mobile's WCDMA (3G).  (At&t has roaming agreements with T-Mobile)

Since T-Mobile will be shutting down its 3G Network in June, it is a Band-Aid.

The 5T does support VoLTE (I've seen the VoLTE icon when on StraightTalk before they kicked me off) but it's just not certified by AT&T and not on their whitelist anymore.

Anyway, I don't know what SIM card information I'm suppose to check at that link. I don't want to replace my SIM card, it's brand new from AT&T and should work fine. If I follow links related to my situation, I eventually reach the prepaid SIM activation page: https://www.att.com/prepaid/activations/#/activate.html

But I've already tried putting my information in to this form and it says my SIM card is already activated. I believe the only way to solve my situation is to get a hold of a human by calling one of the numbers I listed above and hope that whoever answers can somehow "reset" my SIM card and properly activate it with my new OnePlus 7 Pro.

If you know of any other support phone numbers that I should try, then please let me know.

* but not on AT&T.  And it was NEVER whitelisted.

I owned a OnePlus 5T and used it on AT&T postpaid service. It never showed voice over LTE in the notification bar.

I sold it to a T-Mobile user because I knew it would never have voice over LTE on AT&T as a service provider.

I then purchased a OnePlus 6t. The OnePlus 6t also did not have voice over LTE when I first purchased it. I was able to fuss around in the menus and force voice over LTE. Sometime in spring 2019 an update from oneplus took it away again and I was unable to get the menus to force it back.

In March of 2020 when AT&T started publishing its very first White list of compatible phones the 6T was excluded.

By August I took my family over to Verizon where my 6T was already imei approved.

I suspect AT&T suspended service on your line pending the replacement of your phone. I would go to an AT&T store and see if they could correct the IMEI on your line, but you may need to replace the sim.

Good news! I called the 866.975.0050 number early this morning and someone answered immediately (usually the wait time is at least 30 min). The rep found out that the transfer and activation process was never completed, so she changed a couple things in the system and assigned me a temporary PIN as my password and I was able to login to my ATT Prepaid account, pay the $300, and just like that I have service now on my OnePlus 7 Pro. AT&T needs more custom service reps like her :)

Not sure why AT&T's internal systems can't detect these kind of account limbo situations and fix them automatically, but at least everything is working great now...

We are in the middle of this humongous mess, a few months ago that might have been the first suggestion. But thanks to 3-g  🤬