Not even sure where to get help.

Hi! So, I was an employee over at Warner Bros., signed up for AT&T phone services and signed up for the Elite phone plan that gives you free HBO. So last month when I was laid off, sure -- I expected the phone bill to change, but instead they just pushed me off the HBO..? I still have the same phone plan that -- and I just looked this up -- still includes the free HBO. So what's the deal? I'm going to have to pay the ginormous bill that's coming in any case until I switch carriers - shouldn't I still have the services associated with that ginormous bill until then?

We'll be happy to assist you with both your HBO MAX access and your reward @23LadyM.

We are aware that many customers have been unable to access HBO MAX as part of their subscription. To correct this, let's try the following steps:

That should resume your access. We suggest uninstalling and reinstalling the HBO MAX from any devices on which you may have it installed.

Regarding your reward card: you can check the status of your reward at the provided link by clicking 'Access your rewards' and putting in your wireless number and ZIP code. You can also reach the Reward Center at 800-288-9983 weekdays from 9am to 6pm CST.

Please let us know if this works for you. If you require additional assistance, please don't hesitate to let us know. Thanks for reaching out to our AT&T Community!

Also, come to think of it. When I signed up online for my phones last year, they said I was getting a 200 dollar giftcard. IT NEVER CAME. Maybe I do just switch carriers. smh. But does anyone know who to contact so I can keep getting my HBO until then?

By "Activate HBO Max tile" do you mean: 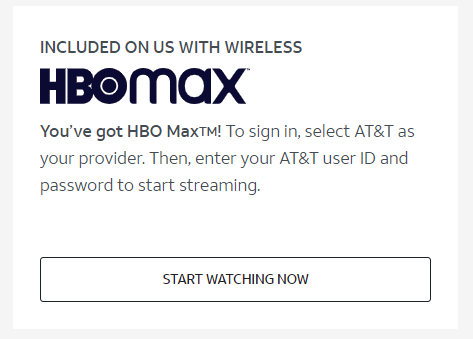 Thanks for responding @23LadyM.

Since you're seeing this instead of the Activate option, it looks like it should be already be active on your account. Please try it and see if it works for you. If not, we can proceed from there.

OK - it took me to an error page a couple of times but it seems to be working on my computer. I will try the other devices and let you know--

Remember to uninstall and reinstall the app before trying it on other devices. Without doing that, you are likely to encounter the error again.

Please let us know how it goes.

It's working! Thank you!!

Yay, we're so glad to hear that that's been resolved for you @23LadyM!

Please let us know if there's anything else we can assist you with. If so, we'll be happy to help. Thank you for being part of the AT&T family.