Top 5 panels to check out during DC FanDome 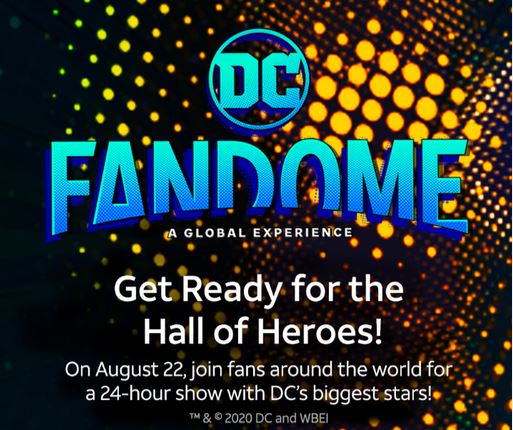 The DC FanDome programming schedule has been released!

Kicking off Aug. 22 at 10 a.m., the 24-hour DC FanDome celebrates everything DC: comic books, films, television shows, games and more. The programming, featuring over 300 guests, will be accessible through the six different areas of DCFanDome.com.

The schedule for DC FanDome's virtual main hall, called the Hall of Heroes, includes panels for DC's most anticipated upcoming films such as "Wonder Woman 1984," "The Suicide Squad," "The Batman," "The Flash," "Black Adam" and the so-called Snyder cut of "Justice League," as well as a spotlight on the Sandman Universe and the women of color who portray some of DC TV's most memorable characters.

Unique programs are also scheduled for the five other immersive "Verses" of DC FanDome. The WatchVerse area will host programming for DC's television series such as "The Flash," "Black Lightning," "Batwoman," "Pennyworth," "DC's Legends of Tomorrow," "DC's Stargirl" and "Doom Patrol," as well as screenings of a Dwayne McDuffie documentary and an episode of "Static Shock."

The KidsVerse will house children's programming and sneak peeks, YouVerse will be home to fan-generated content, the InsiderVerse will offer behind-the-scenes looks at all areas of the DC universe, and the FunVerse is the place to head for merchandise and activities.