Questions about your Internet or WiFi? We’ve got answers on this live “Ask an Expert” session!

We have AT&T and Community experts available to answer all your questions. 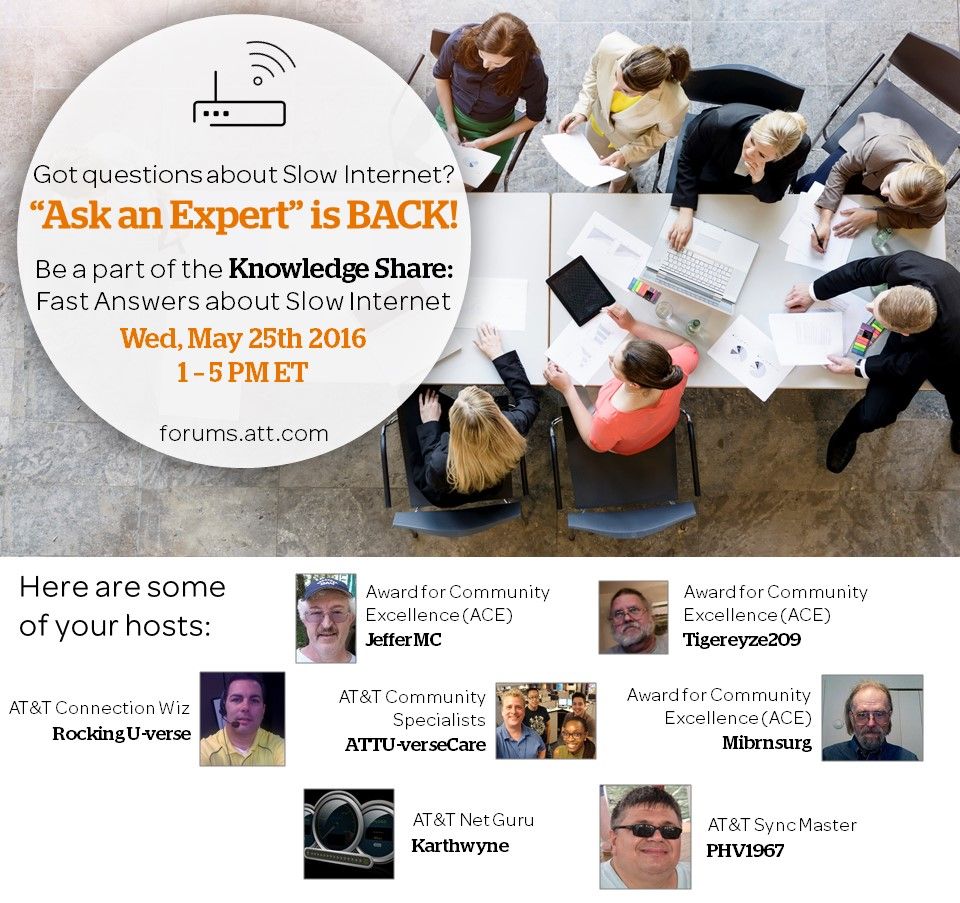 Meet Your Panel for the May 25, 2016  Knowledge Share:  Fast Answers about Slow Internet!

ATTU-verseCare has been active in the forums since 2010 as a group of four AT&T Technical Managers (David, Chris, Jared, and Ani.) With a total of 25 years in the company, the team is always looking to share solutions with customers in the Community! The team tweets for @ATTCares and @DIRECTVService as a fun way to share all the community self-help tips.

Karthwyne – with 12 years of AT&T experience in advanced troubleshooting – invites you to try his baby, att.com/speedtest. For fun, he works on computers, and enjoys mountain hiking.

Retired truck driver Mibrnsurg's (Michigan Brain Surgeon) motto is, "With just a few questions, I get them to the answer without the surgery." His data progression began with punch cards in 1969, culminating in AT&T U-verse internet in 2008 - when he began engaging in the community. In addition to "thanks" from fellow members, he also collects U.S. stamps and coins.

Rocking U-verse has been troubleshooting internet and connectivity issues since 1984. When he’s not rocking his AT&T U-verse Customer Care desk, he’s parenting his college and high-school aged children.

U.S. Army veteran and retired electrician Tigereyze209 is a former mainframe operator and self-taught PC guru who joined the community in December, 2014. He enjoys answering DSL-related questions, listening to audio books and walks on Florida beaches.

PHV1967 is a RF engineer with more than 25 years of experience in modulation and access Techniques, synchronization and noise/jamming Suppression, system Integration, EMI/EMC, Home security and automation including Smart Energy, wireless systems and networks. He enjoys playing soccer, traveling and hanging out with his family.

TangoTangoTango has been with AT&T & AT&T/Bell Labs for 29 years and previously worked in the Banking, Brokerage and Remote Computing businesses. His current work is focused on Outage Analysis and Innovation addressing issues in the wireless and wireline elements of our business. His interest in communications technologies began with gift of a crystal radio kit at age six from a neighbor and evolved as the Arpanet became the Internet. TangoTangoTango is also an active Scouter, camper, hockey fan and licensed Amateur Radio operator with an interest in resilient and sustainable systems.

Welcome to the Ask an Expert session! This session is now open for all your questions and experts are on standby to assist.

Is this the way it works?

I have AT&T GigaPower 1Gb Internet service at our house.  Basically my question is what can I reasonably expect in terms of max Internet speeds on wireless devices (e.g., iPhone 6 Plus, iPad Air 2) through my AT&T (5268A) Residential Gateway?  AT&T tech support advised I should see 600+ Mbps on wireless devices, but currently I am topping out at 190 Mbps download (on the 5 Ghz band) and about 40 Mbps download (on the 2.4 band). I realize there are multiple factors (network congestion, environmental aspects, etc.) that affect Internet speed.

@wilcalint  Yes pose your problem and we will respond to you. 😉

Well I need a booster or extender that would reach about 300 + ft from my uverse wifi to my guest house. I'm a woman so you will have to tell me what the easiest thing to do. I wish I would not have to run any cable or wires anywhere!

25 + year customer with ATT and last 5-6 have been miserable.  Putting aside the constant rate increases (why is there not a contract, and I’m sick of subsidizing the low prices for new suckers that ATT is drawing in).  At least three times in the past 5-6  years my DSl service stopped completely and the tech had to fix something at the box half a mile away.  Also, the worst is the constant dropping out of service.  No, it’s not a filter problem; no it’s not the modem.  It’s ATT.  The best thing ATT is doing right now is making me not wanting to be a customer in the future.

@wilcalint   How is what occuring?